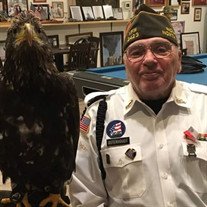 Kurt Lee Osterhoudt, 79, passed away on January 18, 2021.. He was a life member of the James B. Crump VFW Post 2423 who severed on the Honor Guard and in other capacities.

The family will receive friends on January 27th at Heritage Funeral Home, Indian Trail Chapel. A horse drawn caisson took Kurt to his funeral service at the Indian Trail United Methodist Church on January 28th. His graveside was held at 2 pm at Salisbury National Cemetery with full military honors. Kurt was born on June 19, 1941 in Orange County, NY to the late Clarence and Blanche Height Osterhoudt. He was also preceded in death by his brother, Elton and sisters Erline and Margaret. Kurt served in the US Army. He was stationed in Georgia and was a dog handler with the MP’s in Korea, He served in Germany and tank driver during Vietnam. He was an active member with the James B. Crump VFW Post 2423 for many years and member of the honor guard and Patriots Guard. Kurt loved to help people and dedicated his time helping veterans. He enjoyed the camaraderie with the veterans as he taken them to their medical appointments and driving for the Red Cross. Mr. Osterhoudt worked for Pan/Glo delivering baked goods. He was a coastal truck driver and security guard. He is survived by his wife Nellie Herman Osterhoudt (Married Oct 30, 1993); stepchildren, Linda Guynn (Scott), Howie Herman and Nolly Claudio; sister, Linda Osterhoudt; grandchildren, Savanna and Nicole; great-granddaughter Jordyn; several nieces and nephews; his feline children, Katie and Midnight and a host of friends and his extended family at the James B. Crump VFW Post 2423.  In lieu of flowers, donations may be made to James B. Crump VFW Post 2423.