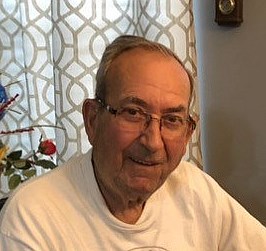 Coy Lee Gillenwater, Sr., 84, of Indian Trail, NC, formerly a resident of New Orleans, LA for 41 years, took his heavenly voyage with "Fair Winds and Following Seas" died on Thursday, July 9, 2020, surrounded by his loving family after a short battle with pneumonia and lung cancer. Coy was a United States Navy Veteran for 22 years who honorably served in the Vietnam War. He was awarded a Navy Achievement Medal with combat V, a Navy Unit Commendation, a National Defense Service Medal, a Sharpshooter Ribbon and a Vietnam Service Medal. The Navy taught him the value of discipline and teamwork and the importance of investing in a cause larger than himself. After retiring from the Navy, he worked for Zatarains, Inc. as a shipping and receiving administrator for more than twenty years. In 2015, Coy and his wife, Carol, moved to North Carolina to be closer to family. In 2018, Coy found Christ and was baptized in the Catholic church and was an active member of St. Luke’s Catholic Church. He also proudly served with the VFW Post 2423, Indian Trail with the Honor Guard as well as the Vietnam Veterans of America Chapter 1103. He served as President of the Fleet Reserve and the VFW in New Orleans and was a lifetime member of the American Legion. Coy was actively involved in ships’ reunions for the vessels on which he served during his time in the Navy. He was a loving husband, father, and grandfather. Surviving are his wife of 53 years, Carol of Indian Trail, NC, a son, Coy Gillenwater, Jr and wife Tara of Indian Trail NC, a daughter, Tamara Mendez and husband Danny of Dallas, TX. Grandchildren Joseph, Emily, Gretchen, Cooper, and Neva. Preceding him in death were his parents, Milo and Una Perry Gillenwater; and siblings, J. B. Gillenwater, Harold Gillenwater, Kirby Gillenwater, Delmar Gillenwater, Gene Gillenwater, and Jack Gillenwater, and Peggy Cline.

In lieu of flowers, the family welcomes donations in Coy's honor to the Disabled American Veterans nonprofit charity (dav.org).